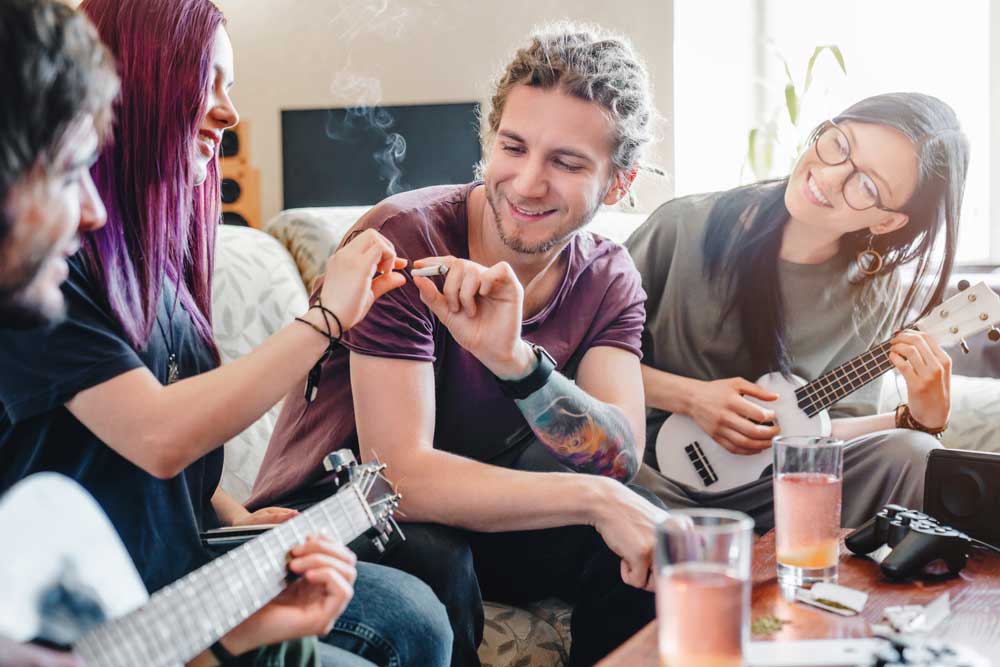 Just like every moment in your life that has that special soundtrack, toking also has its cool rhythms. Still looking for that perfect music the next time you ride the high? These top ten songs will surely be your next playlist!

Why Play Music When You Take Cannabis?

Obviously, there’s a reason why most cannabis smokers love to listen to music as they get high. Some reveal that listening to music enhances the effect of weed. Listening to relaxing music as you enjoy a true blue indica blend will help you feel its delicious relaxing effect whereas indulging in psychedelic rock music will greatly boost a sativa’s high.

Listening to music helps some people to focus and to become more creative. This is why some consumers who use cannabis for focus; creativity and energy like to keep a playlist of their favorite inspiring tunes. Some would play their stereos loud, enjoying loud bass beats and singing along as they work. Some would rather keep their music close by and just wear headphones or earbuds which of course greatly enhances their mood and their ability to think and create.

Some consumers reveal that they play music to improve their mood especially when they use cannabis for stress, anxiety, and depression. CBD strains, in particular, has the ability to boost mood and flush out negative emotions. CBD strains combined with good music can quickly help people relieve stress and anxiety so they can focus on what’s more important in their lives.

Sometimes music can help you ease stress and stimulate relaxation and even sleep. Insomniacs can get relief from cannabis strains that can induce sleep and music can help set the mood for sleep. If you have had a tiring day and your mind is still reeling from stress, you can ease your worries and relax while listening to good music and enjoying a smoke.

Party music is also preferred by people who are in pot sessions and events. This is why most cannabis-themed events all over the world have outdoor concerts. Countless singers, songwriters, and artists support weed use which is why their fans follow in their footsteps.

The Top 10 Songs to Listen to While Consuming Weed

Now, this is a complete revelation! Just when you thought this song was about a man thinking of the love of his life when frontrunner Paul McCartney explained that this was not the message of this song at all.

He revealed the meaning of Got to Get You Into My Life when he was interviewed for his book “Paul McCartney: Many Years from Now” saying that they were not singing about some woman but rather it was about weed. He wrote the song when he was taking weed for the first time.

He explained that he was a “straight working –class lad” before but after he discovered smoking pot, he became someone new. He enjoyed marijuana’s uplifting effects so much saying that it was unlike alcohol and pills which have terrible side effects. He called weed “mind-expanding” which was the reason for the lyrics “I’m going to do this. This is not a bad idea.”

Aside from being a good weed song, Rainy Day Women #12 and 35 also has a secret message written in plain sight. Bob Dylan announced that he would never write a song about drugs but apparently, this song was all about it.

It’s cool beats and interesting chorus saying: ”Everybody must get stoned!” has become an anthem for most cannabis users. People also think that rainy day woman is an old weed slang. And who could deny that 12 multiplied by 35 is 420?

The song will give you that interesting high. Just listening to it may even get you in the mood to get high. A tip from fans: try the instrumental version, it will get you stoned faster.

Rick James’s song Mary Jane is undoubtedly about weed. Just listening to it will instantly make you high as a kite. James was known for his drug of choice: cocaine but he also admitted that he loved weed. And when Rick James bought weed he purchased pounds of it!

Mary Jane was at the top of the charts as one of the best R&B hits in 1978 and was also included in the pop charts. This song was often the highlight of Rick James’ live performances where he would perform in the middle of two huge fake joints. As he sang, he would take puffs from a real one.

What’s a list of the top ten songs for pot sessions without Snoop Dogg? This song was all about “ghetto stuff” explained Snoop in an interview for the Rolling Stones in 1993 about his single Gin and Juice. It told a story about how a house party in the hood has gone out of hand with so much drama and weed thus making this the ultimate pot session music you should listen to with friends.

Snoop Dogg has made marijuana his trademark and he made every opportunity to endorse weed use from his concerts, television appearances, and other live engagements. Snoop even revealed that he would regularly use 80 joints per day! Gin and Juice are just one Snoop Dogg’s many songs about cannabis and enjoying weed use.

Neil Young recorded Roll Another Number after the deaths of Danny Whitten and Bruce Berry in 1975. This song was about a man in a band caught in the grips of alcohol and chemical dependency and depression.

But Young revealed that he was not a pothead and in fact, if he were to get high, he would drink a lot of tequila and just enjoy life at the edge. But if Young was deep into alcohol, the tracks in Roll Another Number says otherwise. In the song, Young sang that he had problems starting his car and said he was like “a million miles away.”

It looks like he was into weed as well when you wrote this song! These are certainly enough reasons you may want to play this song in the next pot session at home.

After the success of Exodus in 1977, Bob Marley just had to follow it up. Exodus was about religion, faith, and politics, therefore, it was certainly proper to follow with Kaya. Bob Marley said that Kaya is slang for herb in Jamaica. The song Kaya was about someone who wakes and bakes; something that stones will surely be able to relate.

Bob Marley believed that marijuana use is more of a spiritual journey. It was something that will bring you closer to God. Kaya’s tracks are both literal as well as metaphorical as it spoke of “chasing away the rain.” The uplifting rhythm and the cool beats make Kaya a favorite among stoners as well as Bob Marley followers. This could also become your favorite pot session song too so download it on your phone right away.

Miley Cyrus may be the most vocal celebrity about her weed use. She even called marijuana her first love and it was the “best drug on earth.” The “Hannah Montana” star once declared that she would stop smoking weed to focus on her music. She said that weed caused her to eat a lot and to spend a lot of time at home with her pets. But just a few months ago, she said that she could come back anytime soon because it was really his first love.

The song Dooo It! was a part of her album Miley Cyrus & Her Dead Petz. It’s a song filled with love for weed and about Miley’s love of smoking weed. Even the words dooo it will encourage you to pick up a joint now and smoke it. Dooo It! has become the anthem of most 21st century stoners all over the world.

8. Roll Me Up and Smoke Me When I Die – Willie Nelson with Snoop Dogg, Kris Kristofferson and Jamey Johnson 2005

Roll Me Up and Smoke Me When I Die is a cannabis-infused song made by none other than Willie Nelson. Willie seems to be instructing the listener on what he has to do with his body after he dies. He tells him to cremate him and to do what he thinks is the best for his soul: to roll his ashes in a joint and smoke him.

What’s interesting about this song is that it features country-music legends Kris Kristofferson and Jamey Johnson. Snoop Dogg also adds his style and injects that the listener should invite his friends for a party as everyone enjoys a good smoke. Roll Me Up is certainly a light-hearted song that puts a new meaning to dying, cremation and toking.

The late Amy Winehouse admitted that she smoked a lot of weed. In an interview with the Rolling Stone in 2007, she revealed that she had an “addictive personality” and that she went from one drug to another. The song “Addicted” warns about a friend who smoked all her weed. Amy tells her friend that it should only be proper to replace what she took and to call the “green man.”

The song has a beat that’s perfect for enjoying an uplifting high that’s not too overboard. It is a song that will get you through good times and bad remembering people who have shared your smoke, one way or another.

When Amy Winehouse was found dead in her home, her blood alcohol levels were five times the legal driving limit. She died of alcohol poisoning.  Perhaps if she just stuck to smoking weed then she wouldn’t have ended this way.

Because I Got High by Afroman is a classic pot session song that describes the life of a man who was not able to get anything done because he was just too high. This song was once the top track of every music player and even had versions of its weird lyrics translated in different languages!

Singer and songwriter Joseph Foreman or Afroman admitted that it only took him two minutes to write this song. The nursery rhyme-style of this song launched him to superstardom and has opened to the world the lifestyle that most potheads have day after day.

In the song, the singer reasoned that he was not able to do a lot of things that day because he was just too high. And because Afroman got too high and wrote this song, he ended up getting a record deal. He even received a Grammy nomination making him a name recognized everywhere. This song took him to fame in 2000 but he released an updated version in 2014 and dedicated this for the new generation of potheads.

So what’s your favorite from this list? Find the one that suits your high? We may all have different takes when it comes to music but all pot users can certainly agree that these tunes are far out. You can download these songs now on Spotify or in other music listening online sites and apps. Download one on your phone and take these songs on the go. You will surely feel high just listening to these great timeless cannabis tunes.

No By clicking yes, you certify that you are over 18. By using this website, you agree to our legal disclaimer.
× Chat Us with Whatsapp